The AMRPE Legislative Committee and our lobbyists from Browning, Kaleczyc, Berry & Hoven (BKBH) monitored potential bills that affect our membership.

Now that the Legislative session is closed, click on the links below to read about the session.

During the interim, HB 715 (pasted below) requires the Legislative Finance Committee to complete a “financial modernization and risk analysis study” and “conduct a study on long-term budget stabilization.” Our concern is that HB 715 contains language that may ultimately affect the retirement systems, including (see page 8) “exploring revenue sufficiency for … pensions” and “research related to … pension stress testing”. AMRPE will monitor the activity of the Legislative Finance Committee regarding House Bill 715.

October 2019 Update on House Bill 715 from our lobbyist

In the 2009 legislative session, AMRPE was successful in lobbying the Legislature to pass House Bill 315 which added an inflation index to the pension exemption on Montana income tax.  Prior to this, exemption rates had not been changed since originally enacted in 1991.  The inflation index benefits all retirees living in Montana.

Because of the uncertain economic conditions of both the state and nation in 2011, no favorable retiree legislation was passed.  However, AMRPE lobbying during the 2011 legislative session was successful in preserving public retirees current benefits.  We introduced a bill to use coal tax revenue to shore up the PERS Trust Fund, which was used as a basis for the Governor’s HB 434 in the next Legislative Session.

In the 2013 legislative session, AMRPE opposed and helped defeat all efforts to convert the Defined Benefits Plan to a Defined Contribution Plan. We introduced HB 382, which used a portion of coal tax revenues to fund the current PERS Trust Fund.  This concept was used in HB 454, which did pass. We lobbied hard to remove any reduction to the GABA for current retirees in HB 454.

We also lobbied to protect the Montana income tax deduction on pension benefits and to defeat SB 353 which would have substantially changed the makeup of the PERS Board. 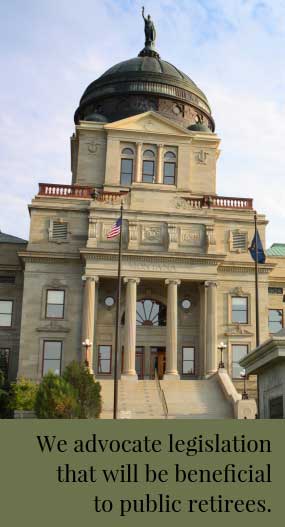